Spring-Ford Senior High School in Limerick Township, Penn., is part of a suburban school district about 30 miles outside Philadelphia. Dr. Patrick Nugent, principal at Spring-Ford, sat down with Athletic Business to discuss how his team went about creating a state-of-the-art fitness facility that’s now the envy of other schools in the area.

Can you give us a little background information on Spring-Ford?

We’re a suburban school district about 30 miles outside Philadelphia. It’s a pretty affluent area, we have a lot of pharmaceutical companies and such. We’re right on Route 422, so we’re easily accessible to Philadelphia, and even Reading in the other direction. We’re kind of strategically placed in a nice location for folks to settle.

The high school is two buildings, the simple rationale for that is we’ve grown exponentially for a lot of reasons, and one of the main reasons is it’s a major expressway. What happened was we grew so much that (in 2000) we moved from across the street in a 9-12 environment and we moved into this bigger building where I’m sitting now. We kept growing and we had to move our ninth grade back into the old high school. We are really one high school, we just have two buildings. We came across the street with about 1,300 students 9-12, now we have around 2,600

What are your responsibilities in the district and how long have you been there?

I became principal in 2002, and it’s rare to be around that long. I’m the high school principal. I actually serve the 10-12 (building), because we have two buildings, so I sit in the 10-12. When the buildings split, I was 9-12 for a few years after that, but simply because of need we added a person across the street for the ninth-grade center. I’m hiring, management, you name it.

Can you tell us about the recent projects?

This is the third major project to our building since it was initially built. The prior renovations were predominantly to our classroom space, and we did some cafeteria work. We didn’t really address the core areas of the arts, performing arts or physical education. So that’s what this last focus was. We built a major addition on with the performing arts center, and we built the fitness center – what we call the physical education center. When we opened the building in 2000, we had a fitness center, and I would tell you at the time it was probably pretty much state of the art and probably the envy of many high schools in that time. Now, this one is probably the envy of any high school, pretty much anywhere. What we were able to accomplish here is somewhat surreal and remarkable.

What makes the physical education center so outstanding?

The size alone gives us a great opportunity to operate in a matter that rivals something like an Anytime Fitness. We’re bigger than some of those places. So that makes it remarkable. And then the fact that it’s a brand-new building, so it’s a new addition. It’s not a renovation. Every piece of equipment in the room is new. We don’t even have an old filing cabinet in there. Our school board and our community were very instrumental and supportive in this project.

Why do you think the community felt these projects were important?

It’s a school district that we’re very proud of. It’s a great place to be, and we have very, very supportive parental and community-based support. We had a town hall meeting that’s on our website… with an auditorium of 1,000 seats, it was dang near filled for a town hall meeting. There’s always opposition, and there’s always support. I will tell you that 90 percent of people in the facility that evening were in support of the project. When you have parental support in public education, you can make the earth move. And the school board, they went back and forth. It was a fiscally responsible project, and if we weren’t in the fiscal position to do it, I don’t think we would have had the support. Everything costs money and there’s always that component. I just think we were in the right place at the right time to make it all happen.

How have the students and community members responded?

Really well. We also added some personnel with this addition. We hired a strength and conditioning coach that was a necessity from my perspective. You can build it, they can come, but if you don’t have somebody running the operation and monitoring the operation it’s going to be a challenge. We experienced that 20 years ago when we opened the building at our other facility. … When you come in in the morning, it looks the same way as it did the morning before, which is immaculate. The kids are taking great pride in it, they’re super excited to be in there, it’s very spacious. We get 100 kids in there and don’t even blink an eye.

What went into the decision to use Matrix (and Matrix dealer Webster’s Fitness Products Inc.)?

We bantered back and forth and made the decision that we were going to go with one vendor and not piecemeal. There were things we liked from every vendor, but to mix and match was going to be fiscally irresponsible. The other thing is customer service that was going to be available to us. Pricing helped, and with Matrix the warranties we were offered were a factor. Webster’s is a relationship of mine that I’ve had for years. They were on the forefront of helping us through this process. When it really came down to it, the bottom line was pricing was a major factor and there was a level of knowing the vendors, although I felt comfortable with everybody. Everybody was professional. It was a really good process.

For me to point at three different machines and say, ‘this one’s better than the other’ is really difficult. They all look really nice, and all have some features that are nice. So, when it came down to it, we sat and we pondered and somebody had to make a decision. We went with Matrix. We’ve been happy.

How did Matrix/Webster’s help with the process?

We had an elevator that wasn’t done in time and we didn’t get to open the facility when we wanted to, but Webster’s was really accommodating. They held some equipment longer than they wanted to or should have needed to. And when we didn’t have an elevator to get some of the equipment to the mezzanine, they lugged it up the stairs. A lot of people did a lot of things. Everyone comes in and says ‘oh, it looks great, it’s really nice’, but no one really knows the amount of time that you put into this. And it is beautiful.

And Tom Webster, I have his cellphone number. He was in San Diego at a conference one weekend, and I had a question, and it’s less than 24 hours that he gets back to me. What’s important to me is their response time and their attention to getting things ready.

What advice would you give to other schools undergoing a similar project? 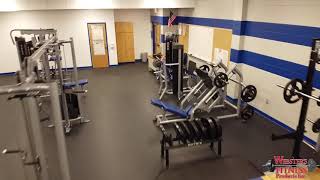 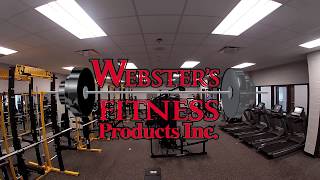